Marc Cogliatti, director, Global Capital Markets at Validus Risk Management, studies the catalysts that could ultimately halt the decline of the pound against the US dollar.

Since the start of 2022, the British pound has fallen by 11.8% against the dollar, making it one of the worst performing currencies (in terms of spot yield) in the G10.

With GBPUSD testing below $1.18 this morning and seemingly only heading in one direction, we are once again wondering how much further the pound will fall and what will be the catalyst to reverse it?

When I wrote about this topic last month, I cited the pound’s undervaluation as a key factor that could prevent it from falling further.

This still rings true today, with the pound currently undervalued by 19.3% (we calculate fair value using a mixed CPI/PPI model).

However, those of us able to remember the heady days of two dollars to the pound will notice that the pound was significantly overvalued for a few years before falling precipitously in 2008 at the height of the global financial crisis.

With this in mind, it is not impossible for the pound to fall further and remain significantly undervalued for an extended period. 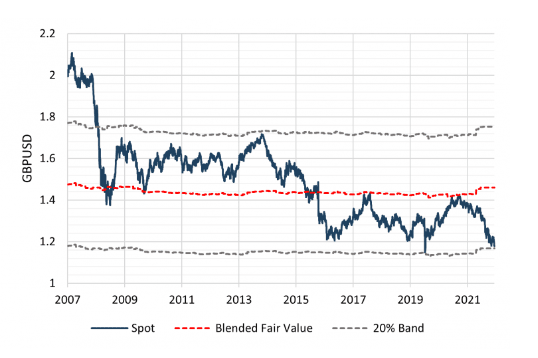 In terms of outlook, the story appears very bleak.

As the market quickly turned to price in anticipation of further MPC tightening, the British pound fell.

Conventional wisdom suggests that an increased likelihood of higher rates should translate to a stronger currency, so the fact that the opposite rings true is a worrying signal for the pound.

A breakdown of rate/currency performance in the UK is closer to what one would expect to see in emerging markets. The problem is that even with nominal rates expected to rise, significantly higher inflation means that real rates continue to fall.

An article published by Citi Bank was picked up by mainstream media in the UK, suggesting that inflation could exceed 18% amid the energy crisis (petrol prices in particular).

This is clearly an extreme forecast and well above both the consensus (11.9%) and the Bank of England’s own forecast (13%), but at the very least it is a scenario to be considered from a risk management point of view.

It may not be impossible for a new prime minister to take matters into his own hands and stoke the fire with further fiscal stimulus.

Interestingly, looking at the latest FX forecasts consistent with Bloomberg, among banks that updated their forecasts last week, the consensus for the end of Q3 and Q4 was still $1.19.

A notable outlier was JP Morgan, which sees the pound dip to $1.14 at the end of the third quarter before staging a very slow recovery in 2023.

At Validus, our overall bias is still against the dollar (on a valuation basis), but our conviction is starting to weaken given recent price action.

What is also interesting is that this movement is not isolated to the British pound.

All G10 currencies have fallen against the dollar since the beginning of the year and the euro has performed very similarly to the pound. So much so that the EURGBP has been trading widely between 0.83 and 0.86 year-to-date (currently mid-range at 0.8450).

What could reverse the decline of sterling?

First and foremost, sterling has always performed better in a “risky” environment. Although equity markets have been surprisingly strong in recent months, underlying concerns about the health of the global economy, the war in Ukraine and the ability of central banks to control inflation persist.

As unlikely as it may seem, a more positive risk sentiment would certainly help the British Pound’s cause.

A second influence that can help all currencies comes from the dollar side of the equation.

A drop in US real rates (either due to lower Fed rates or higher inflation) would certainly make the dollar less attractive (or at least more on par with its peers).

At current levels, pound assets look very cheap for foreign investors (at least those with dollars).

True, such assets could well become even cheaper, but as Baron Rothschild once said, “The time to buy is when there is blood in the streets.”

An Overview of Marauders

The Adirondacks are approaching color peak