On August 10, the US Dollar Index (DXY) had its second worst session of 2022, falling more than 1% on the day, after the US CPI inflation rate slowed to 8.5 % year-on-year in July, up from 9.1%, missing market expectations of an 8.7% increase. Core inflation, which excludes energy and food, was also weaker than expected at 5.9% from 6.1%, bolstering market hopes that inflation has peaked and will start to drop from here.

The US dollar’s bull run that began in the second half of 2021 is now showing signs of weakness as lower inflation could prompt the Fed to slow the pace of interest rate hikes, reducing the dollar’s advantage compared to his peers.

According to our most recent technical analysis of the US Dollar Index (DXY), the 50-day moving average has been broken decisively for the first time this year. If this bearish momentum is confirmed by a drop below 103.40 (38.2% Fibonacci retracement of the 2022 low/high), the DXY could quickly drop towards the key support at 101.8 (50% Fibonacci ). In the near-term alternative scenario, the DXY is likely to bounce off the 103.4 support level before encountering selling pressure at the 105.6 (23.6% Fibonacci) resistance level.

Fundamental analysis of the US dollar: are the fireworks over for now?

CPI down, Fed rate futures down and USD weaker.

The dollar had a classic reaction to July’s US inflation report, which found the CPI rate had slowed to 8.5% year-on-year from a four-decade high of 9.1% in June, and below market expectations of 8.7%.

The decline in inflation is mainly due to a significant slowdown in energy items (gasoline, fuel oil and natural gas), but inflation remains high in food, housing and medical care services. The year-over-year inflation rate for all items excluding food and energy was 5.9% in July, the same as in June, which is still far from the target for the Fed.

However, calling for an end to the Fed hike cycle after only a month of falling inflation may be premature here, as services inflation remains elevated. Further inflation readings below expectations are needed to indicate a sustained downtrend.

But for now, the market is assuming that inflation has peaked and will start falling from here, believing that the Fed will not raise interest rates aggressively.

If this narrative gains traction in the coming weeks, it will likely keep real yields on Treasury inflation-protected securities low, which will weigh on the dollar given the close relationship between the greenback and the real returns.

What Fed rate path is market pricing in? What is the impact on the dollar? 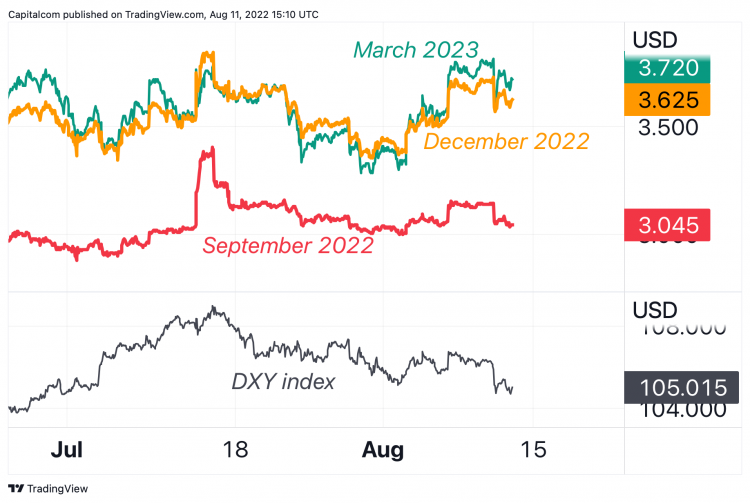 At the time of writing, the market expects interest rates to rise to 3% in September 2022, effectively discounting a 50 basis point increase rather than a 75 basis point increase. Year-end interest rates are then expected to rise to 3.6%, and rates are expected to remain broadly unchanged in the first quarter of 2023, with the Fed’s target rate fixing market prices in March 2023 at 3.7. %.

Falling market expectations for rate hikes at the September FOMC meeting is what has recently caused the dollar index to tumble, as seen in the chart above.

How do you feel about DXY?

Vote to see the sentiment of traders!

A further downgrade to the September FOMC meeting now looks unlikely, and that could create a floor for the dollar.

For another rally in the dollar to occur, however, Fed speakers must deliver hawkish remarks that cast doubt on the peak inflation theory and call for rapid interest rate hikes.

Markets will likely wait until the Fed’s Jackson Hole Symposium meeting, which takes place August 25-27, for more information on the Fed’s next policy moves. 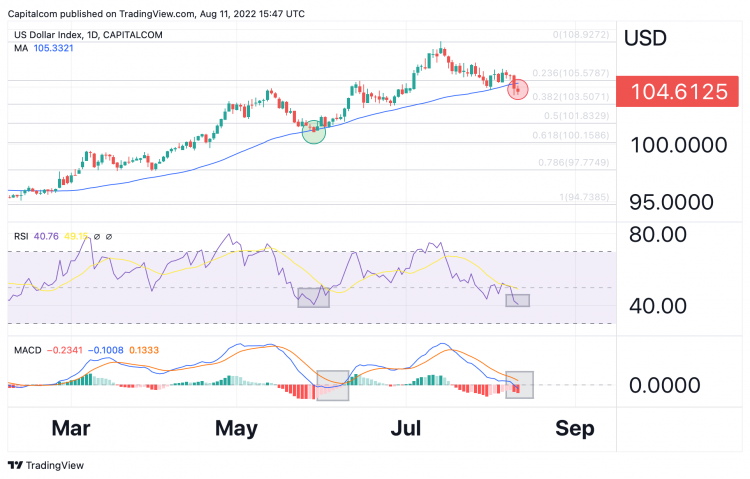 Chart analysis of the US Dollar Index (DXY) as of August 11, 2022 – Photo: Capital.com / Source: Tradingview

The US Dollar Index (DXY) has been on a strong uptrend since mid-2021, up 12% from a year ago. Recently, DXY price action has fallen below the key dynamic support of the 50-day moving average (dma), which has remained firm all year, as seen in the chart above.

The daily RSI fell below 50, indicating short-term bearish momentum, and points south towards a test of the May lows (40). The MACD line has also fallen slightly below zero, which may indicate that the major uptrend is being tested. The MACD also fell slightly below the zero line in June, but the DXY bounce off the 50-dma gave a false bearish signal.

Fibonacci retracement analysis (January low/July high) indicates that 103.5 is a good short-term price support level (38.2% Fibo). A breakdown there would prompt the bears to target the 50% Fibonacci level at 101.83. If we get to this level, it will be a key support to watch to see if the major DXY uptrend is over or not.

An alternative near-term scenario sees the DXY bounce off the support at 103.4 before encountering sellers near the resistance at 105.6 (23.6% Fibonacci retracement level).